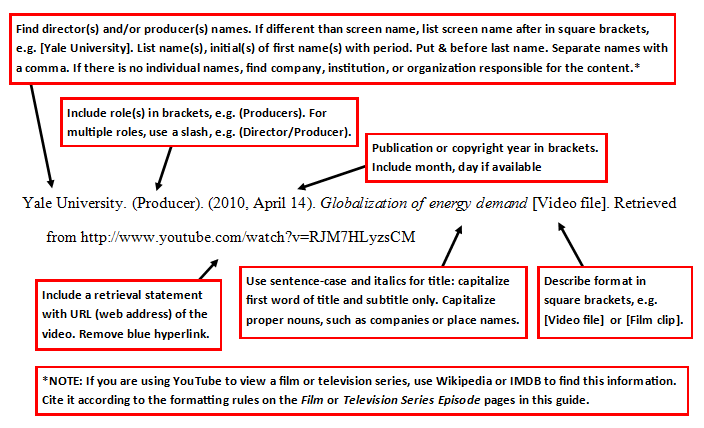 There are two options for citing this source in-text:

1) Place producer/organization and year in brackets at the end of a sentence:

2) Integrate producer/organization and year into the sentence with a signal phrase and narrative; if possible, describe the setting or context:

In an interview with Yale University (2010), Daniel Yergin argued that the success of globalization is reflected in rising energy demand.

APA rules for in-text citation change depending on the number/type of author(s). Count the authors and follow the rule below:

Work with ONE author

Combine both last names, with "&" in brackets or "and" in the signal phrase:
> Research conducted by Bedford and Smith (2008) suggests college students struggle when using APA style. This difficulty can be attributed to the fact that many students did not purchase a style manual or failed to ask their teacher or librarian for help (p. 199).
> Research has suggested that college students struggle when using APA style because they do not acquire the necessary resources or seek additional support on-campus (Chatterjee & Olsen, 2019, para. 2).

Work with THREE to FIVE authors

Work with SIX or more authors

For all in-text citations, use the first author's name followed by et al. in the signal phrase or in brackets:
> In a randomized control trial conducted on diabetic patients, Shaughnessy et al. (2007) found the medication to be effective in 72% of patients (p. 109).
> Multiple studies have demonstrated that traumatic experiences in early childhood can increase the risk of addiction (Okoye et al., 2016, para. 12).

Work with a GROUP, ORGANIZATION or CORPORATE author

Cite the full name of the group or organization. If it is lengthy, cite full name in the first citation and use an abbreviation for following citations:
> The Canadian Medical Association (CMA) concluded there is no causal link between vaccinations and the increase in clinical diagnoses of autism spectrum disorders. Moreover, the CMA warned that such assumptions may lead to the return of childhood illnesses like the measles (2010, pp. 18-21).
> According to Statistics Canada, "[s]ince the early 1990s, Canada has welcomed an average of almost 250,000 immigrants annually" (2016, para. 2).

Work with NO author specified

First, check if there is a group or organization responsible for the content. If you cannot locate one, cite the entire or a shortened version of the title of the work:
> Google was involved in anti-competitive practices ("Patent Trials," 2010, para. 3).
> It was reported that Calgary's office vacancy rate in the downtown core is almost 25% ("Calgary Downtown Vacancy," 2016, para. 1).

Cite IN-TEXT ONLY, no reference list entry is needed. Cite in-text as a personal communication; include initials and last name of the person(s) and the full date. A reference list entry is only needed if you read or listened to the interview/presentation in a print or electronically published source.
> A registered nurse explained how "elderly patients with dementia may wander off the premises of nursing homes" (J. McGill, personal communication, October 12, 2015).
> Plagiarism is a serious violation of academic honesty policies at Bow Valley College (L. Peters, personal communication, September 12, 2016).

SECONDARY SOURCE (A source found inside a source)

If you want to use a source quoted, paraphrased, or summarized in a source, cite or refer to original source(s) IN-TEXT ONLY and cite the actual source you are using both in-text and in the reference list.

Smith (the secondary source) refers to the ideas of Johnson (the original source):

In the References list at the end of your assignment, only cite the source by Smith.

In the References list at the end of your assignment, only cite the source by Holden et al. 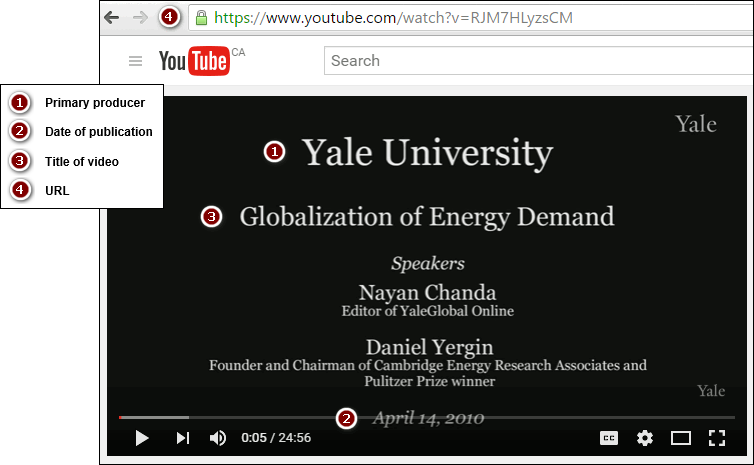